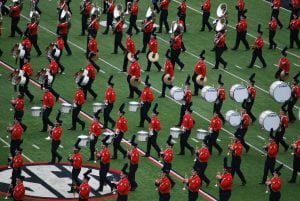 There is a new podcast out, called Odessa by the New York Times. It profiles a high school in Odessa, Texas that opened up early in the pandemic, betting on opening to support students who needed it most, with the reality of a virus that does not care who needs school. But really it is about giving hope and connection to kids, through things like friends, teachers, sports and the real star of the show, the marching band.

It turns out Odessa’s football team is not that great, but their marching band, top notch. Students consistently score below proficient on state exams, and those same students win trophy after trophy in the competitive field of marching band.

I have a soft spot in my heart for marching band, because I was in one in high school. I had just learned to play the flute the year before, so when I met my new best friend the first day of high school, she told me, we should join the marching band. So, we did. I couldn’t really read music, not well, but I was decent at remembering sequences of movements. Walk forward 12 steps, turn at 45 degree to left and march 12 more steps. Endless sequences of movements, me just one link in a complex chain of teenagers playing instruments while marching to all corners of the field, making cool patterns as the music played. I always marveled at the person whose job it was to come up with these choreographed marches and the nomenclature they used to express it.

But really, the fun was the competitions, piling onto a bus and driving to a nearby town. Singing, laughing and eating candy with bandmates. It was teenage bliss. Then, more sitting and laughing in the stands once we got there, as we nervously waited our turn to take the field to perform. I never knew if it was because we did not have much of a band budget or if it was a stylistic choice by the band director, but we did not have traditional band uniforms. No tall puffy hats or thick felted uniforms with decorated epaulettes along the shoulders. No. We dressed like cowboys. White Levi’s, blue gingham shirts and cowboy hats. I was always a little embarrassed, I think we all were, by our uniforms. In fact, kids at our school had a special name they used to call us. Too mean to repeat, but we got used to hearing it lobbed at us. We caught the slur they lobbed with pride and threw them to the ground, marching on to the cadence of our drumline.

Marching band was where I was accepted and learned to be part of a group. A group with a mission, a purpose. I was part of something larger than me, that I contributed to, that only worked when we all worked together. And my best friend was right there with me, two lines over and to the right, with the clarinets. We loved it.

As I listen to the podcast, I hear a new generation of students who have also found the love of marching band. Students willing to leave their homes in the midst of a pandemic, to play their instruments, to be together with those that accept them, to march together in joy and pride.

One thought on “Marching Together in Joy and Pride”